{Note. Some of the following pictures will come up to a larger size if you double click on them.}


This painting by Arthur Hacker, (1858 - 1919) is called “The Sea Maiden” which as I have previously pointed out is another name for mermaid. She is of course naked, as clothing would be a hindrance for her in her job as a diver. The obvious explanation could be that she is receiving a gift from the young shepherd. Perhaps it is an engagement ring, which would make sense of why he is kneeling before her. So it could be a “Romeo and Juliet” type story of two lovers from two different communities of people, a sea-maiden and a landlubber falling in love.

The problem is that what she is holding looks like a bottle, perhaps with herbal medicine in it, and it looks more like she is giving it to him. So perhaps it has another explanation. She is also an herbalist, which means that he is kneeling before her because of her high status. As an herbalist and witch she wouldn’t be someone you treated with any form of disrespect. Could it mean that Arthur Hacker was aware that mermaids, witches and herbalists were the same people and was trying to convey this fact in this picture?

Mermaids also still lived a life of hunter/gathers and this is why they had a far greater knowledge of herbs than farming people. So ordinary people would go to them for help when they became ill. This must have given them high status and great influence among the common people. Clearly the Church didn’t like this and therefore started a propaganda campaign against them before slaughtering millions of witches and mermaids in the infamous witch-hunt.

As I will show, other artists seem to be aware of the mermaid code and attempt to show in their pictures what mermaids really were. 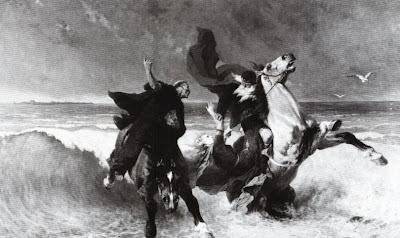 [Dramatic painting by Evariste-Vital Luminais (1822-1896), showing King Grallon fleeing as the sea floods the city of Ker Is. In the story a holy man strikes down his daughter Dahut who supposed to have opened the gates of the dyke, and later became a mermaid. This is Christian propaganda against the Sea-People. In the same way the Church depicted Witches as evil women, justifying their slaughter.]
Posted by william at 10:52 9 comments: Links to this post