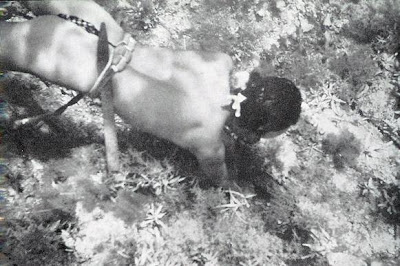 It is estimated that the first humans reached Australia 40-60 thousand years ago. The big problem is that there is water between Australia and Asia. This difficulty seems to have been solved when it was discovered that during the last Ice Age sea levels were a lot lower than they are today. At this time most of Indonesia was one large landmass joined to Asia while Australia was joined to New Guinea, so the solution seems simple; the original Aborigines could walk from Asia to Australia. The problem is that even during the Ice Age there was still open water between the Indonesian landmass and the New Guinea and Australia landmass.

The landlubber theorist cannot get away with saying it happened by accident, with a man and woman reaching Australia floating on a log. This would show up on the genetic code of the Australian Aboriginals, as geneticists would be able to tell if all the Aboriginals in Australia were descended from just a few people. It was a proper invasion of many people. They would have to have had seaworthy sailing raft to do this.

This is because it couldn't have been just a one-way trip. People are very unlikely to take all their family and children to an unknown land. Someone had to have discovered it first, and then travelled back to tell their tribe what they had discovered. Then others would sail across. Perhaps they might have over fished the seafood in their area and wanted to harvest an untouched new place. In time the tribe would set up camp in this new world and finally begin to live there permanently. This would mean the Aboriginals would need to have reasonably seaworthy craft about 50,000 years ago. Most scientists have now accepted this, and no one is seriously disputing it. But now there is an even bigger problem for the landlubber theory. It could be that human beings were building watercraft as long as 900,000 years ago.

One of the early species of human to be discovered was in Java, called Java man. It was Homo erectus. Other finds of the same species have been discovered in China and Africa. The big problem is that bones of Homo erectus along with stone tools have been discovered on the island of Flores. This island is part of the Indonesian archipelago but it is separated from other islands by a deep channel called the Lombok Strait. Even in an Ice Age, when the sea level has dropped, any human has to cross water to get there. At first this wasn’t seen as too big a problem, since it was theorized that a small number of Stone Age folk accidentally drifted as far as Flores after climbing onto thick mats of vegetation that sometimes form near the Southeast Asian coast. That seemed reasonable until local fishermen were consulted. They told of the Lombok Strait's fiendishly shifting currents, vicious whirlpools, and unexpected waves far from shore. It seems with the strong current going through the strait it would be difficult if not impossible to drift across it.

One man, Robert G. Bednarik, decided to build a primitive craft and test what was needed to get across the strait. He made a bamboo raft out of local material using stone tools, then with a crew set off across the strait. It took him 12 hours, to cover a distance of 30 miles; and they had to paddle hard all the way to overcome the effects of the current. This suggests that it was very unlikely that Homo erectus got to Flores by accident but had to have a seaworthy watercraft and work very hard to get there. A raft is not an easy thing to paddle, but then their bones suggested that Homo erectus were stronger individuals than modern human beings. It is also a possibility that Homo erectus managed to swim across, because swimming 30 miles is not impossible for modern people. There is no-way of knowing just how aquatic Homo erectus was, because their bones tell us very little about this. They would certainly need to be very strong swimmers to overcome the strong currents of the strait.

It is of interest that an extinct member of the elephant family, stegodon, was also found on Flores. It is known that elephants are strong swimmers so if a elephant can swim across this channel then Homo erectus would be more than likely be able to do the same.

Even more controversial than this, is the possibility that Homo erectus made it all the way to Australia. Skeletons found in Kow Swamp, in northern Victoria, show features both of modern humans and Homo erectus. This suggests that Homo erectus got to Australia and there, evolved into modern humans. Unfortunately, this goes against the, “Out of Africa” theory that claims that modern humans evolved in Africa. So these finds go against not only the landlubber version of human evolution but the out of Africa theory as well, and for this reason these finds tend to be ignored by scientists outside of Australia.

Another problem is that the bones from Kow Swamp are dated to between 13,000 and 9,000 years ago, but there are skeletons of modern humans found in Australia from the same date, which suggests there were once two different species of humans living in Australia. This is similar to what happened in Europe where modern humans were once living alongside Neanderthals. What is interesting about this, is that both the Neanderthals and the Kow Swamp people were far more robust and stronger individuals than modern people.

If you watch sport or action adventure movies you might be forgiven for thinking that men are really strong creatures. Well I’m afraid to tell all you “macho” guys out there, but compared for size and weight the human animal is just about the weakest animal in the world. Arnold Schwarzenegger is a weakling compared with an average adult chimpanzee.

In most animals it seems that the males fight over the right to mate with the females. We see this clearly in animals like cattle and deer where males head butt each other until the weakest male backs down and the strongest mates with the females. We also see the same behaviour among cats and dogs and other carnivorous animals, where it is the strongest and most aggressive male who is more likely to pass on their genes.

The advantage of this according to Darwin’s theory of evolution is that because strongest and fittest males will mate and pass down their genes to the next generation the weaker males are eliminated from the gene pool of any species. This seems to work very well with many species of animal but there are exceptions, like human beings and bonobos.

What is remarkable about us, as a species of animal, is how weak we are. An average male chimpanzee is about three times as strong as the average man, even though he is smaller in stature, while the gorilla has about four times the strength of humans. This is also true of any other animal of about our size. A deer, dog or big cat of about the same weight as a human can run 3 to 5 times faster than the average human.  One blow from a big cat or large ape will kill even a very strong man.
So why has the human become so weak compared with other animals of an equal size? Does this suggest that sometime during human evolution, the need for males to compete with each other to mate no longer became important for the survival of the species? This can be seen clearly in the relationship between Neanderthals and the first modern Humans over 40 thousand years ago in Europe. The skeletons of the Neanderthals showed they were far stronger and more heavily built than modern Humans living at that time. Both species had about the same sized brains and both used tools. Yet it was the Neanderthals that became extinct and not the physically weaker modern Humans. So it seems that the increased intelligence and tool making ability of Humans made the need for physical strength no longer an important aspect of survival.
The relationship between the Neanderthal and the first modern humans we can see in two species of chimpanzees today. The Congo River in Africa is one of the largest rivers in the World and is in some places over 10 miles wide. The result of this is that the chimpanzees living on different sides of the Congo River have evolved into two different species. Living on one bank is the normal chimpanzee you see in other parts of Africa but on the other bank is the bonobo. This is more lightly built than the heavier and stronger common chimpanzee.
Bonobo males, like humans, do not compete with each other through fighting for the right to mate with females. This is what makes both species physically weaker than chimpanzees and other animals of a similar size. 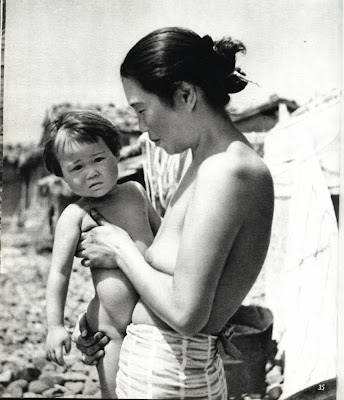 [Photo by Fosco Maraini, from his book, Hekura, The Diving Girl's Island. 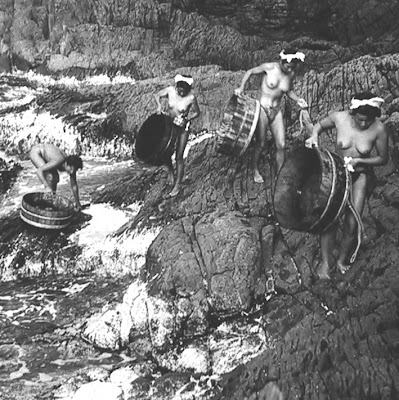 [Photograph by Fosco Maraini, from. -
http://www.fundoshi-bikini.net/nihon-fundoshi/amafun/amafundoshi.html
Showing Ama Divers who have climbed down the side of a cliff in bare feet with their heavy wooden tubs and were now about to put them in the water to start work diving. First having to carry them across the slippery rocks and heavy surf.]

Ancient hominids may have been seafarers

Hominids Went Out of Africa on Rafts

Update on the Australian Aborigine